This enchanting Arctic city is exceptionally easy to get to since Norwegian and SAS fly there. Tromso airport is a mere twelve minutes on the commuter bus from the city centre.

The airport is much smaller than you may have imagined. Think of a greek island kind of set up. Just a few more doors between the outside and entrance lobby to keep the heat in and cold out.

I booked a waterside air bnb on the northern outskirts, in gorgeous Kroken, and the connecting bus took just over fifteen minutes from Tromsø sentrum.

Night view of Tromsø from Kroken in winter

Voila, I was, in what felt like the countryside, on the frozen seaside, with the sound of crisp lapping waves surrounded by the warm neighbourhood feel.

Making navigation easy, ie avoiding waiting for a bus for more than five minutes in the Arctic cold, I recommend downloading the following two apps from Google store. Tromsmobilett will store your ticket or travel card which you can purchase through the app. Troms Reise is the local bus departure/arrival and bus planner app.

Northern lights safaris are very popular but on clear sky nights, you really just want to be keeping an eye out to the sky, and walking away from the street lights. The cable car is open until 11pm in the winter, so you could add an edge to your experience, for a fraction of the cost of a safari. 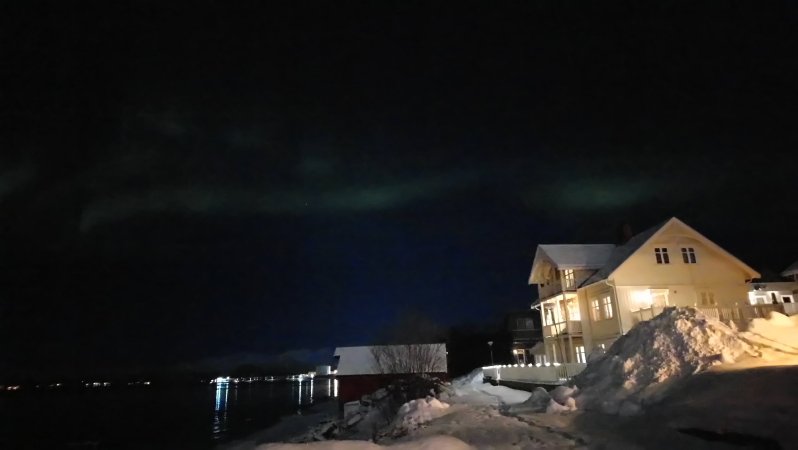 Northern Lights from the coast

Whale seeking is also popular, however as much as I would love to see them, I am not sure of this relationship dynamic so maybe I will be lucky to pass them coincidentally at some point in my life.

The snow here is different. Given you take a trip outside Tromso, you will notice the difference. It is different to the snow in Oslo or anywhere else for that matter. I can only describe it like white glistening gold.

When the northern lights, or aurora borealis, start their wild and unpredictable dance, my first thought was that of water colour paint soaking the paper, or a gymnast’s cord following a complimentary flow.

Going up to the mountain on the cable car is really worth the 190nok. I am not one for a tourist’s gimmick, and almost skipped that. Having done it, I couldn’t have asked for a more splendidly arctic experience with the option of being back in the cradle of the Tromso town within half hour. One tip, to avoid any confusion, although cars run every half hour. If you get there at a busy time, try queing up as they only sell tickets ten minutes before boarding. The views from the top towards the mountains are lunar.

Tromso island and the fjords between the mountains are a feast. Try getting there in the morning and by lunchtime for the most dramatic light effects as the sun is just about caressing the tops of the mountains, at midday in the winter. It is the experience of a lifetime.

Tromso is super safe and cute. Don’t be afraid to walk endlessly to the outskirts.

My super cozy self contained air bnb by the water in Kroken meant I didn’t need to spend hours on an aurora safari and could pop out every hour or so after 10pm to look out for the lights, going back for a cup of hot drink and a snack, before returning back to the outside, even really late into the night.

At 10pm, on the dot, the northern lights or aurora borealis would come out and put on their mesmerising dance. It only required walking to the end of my street past the glare of the street lights to absorb it at its the best. Plus being near the water and walking alongside a snowed over beach is something out of this world in itself and something I had not experienced before. 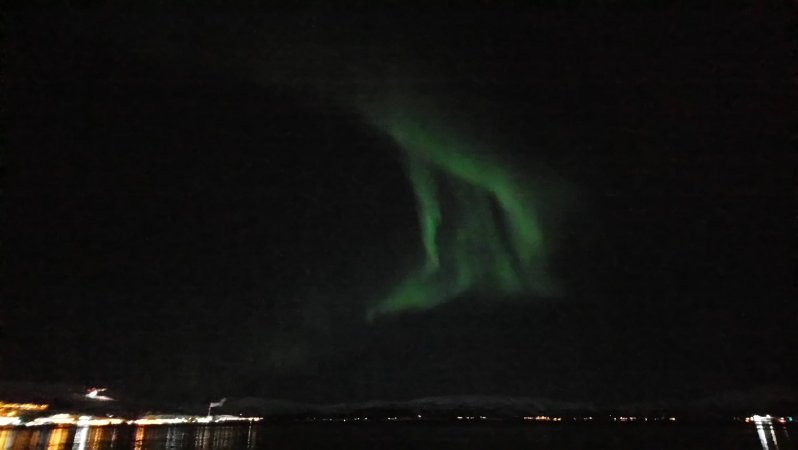 Back in Tromso, a warming coffee and bagel, are to be had in my favourite cafe, Lugar 34. I just hoped the coffee was served in a bigger cup. Tip, head for the upstairs and let the surroundings warm you up from times past. I could have spent all afternoon there but things to see and do.

If you are on a budget or only there for a couple of days and have limited time, take the commuter ferry from Tromso to the fjords and islands. In the winter it is worth waking up for the really early morning ones, so you can see the most of the fjords for 240nok. You will be back in Tromso in a couple of hours which means you still have time for the cable car, the art museum and a cafe or pub or two.

For budget nordic household design pieces head to Kremmerhuset where you will find ceramics and home furnishings in affordable prices. Plus it is in a mall in the centre which means you can use the bathroom and warm up. There is even a restaurant with bay views at the top but didn’t have the time to see for myself.

Out of the two Kaffebonas you will get the best views looking out to the Arctic Cathedral, the sea and the mountains beyond, at the one on Stortorget.

For more views, and dramatic architecture, do visit the Arctic Cathedral. I also recommend walking the length of the bridge for an amazing perspective through the fjord. Warning, although you are caged in the bridge does rattle and creak which may not be for the fainthearted. I am particularly bad with heights however got used to it after a few minutes, and a lot of internal reasoning.

When I went to the Art Museum there was an exhibition on surrealism. I loved the curated text and really chimed with contemporary politics. It basically said something along the lines of… ‘in our times of fake news and misrepresentation, surrealism is more true than it has ever been before. Does that mean that our reality has never been this surreal?’

The story of the northern lights is that they are particles which have been charged through a solar storm, and lit up because the north and south poles are the least protected areas on the globe.

Maybe that explains why in a small place like Tromsø there is a lot of enlightenment, let it be in the tiny yet well represented religious communities, the honest portraying of the Sami people and their portrayals of the intruding scadi people, in art old and contemporary, to the apparent open mindness and chilled out attitude of the modern Tromsøeans.

Here is a short video from the airplane taking off

I really hate goodbyes especially from places that unlock iconic moments on the way my brain works and heart ticks.

Tromso in one of the coldest places on earth, makes it for one hell of a warm welcome.