Andrew Baldwin’s open air metalworks automaton exhibits are warmly welcomed at a time when everything is in lockdown in London.

Located in Trinity Buoy Wharf, earthbound figures matrix into a melting pot of sensations made in fairy tales.

Well here we go again, only this time things are a bit different.

In London, there are noticeably less people out after dark, but shopping malls and cafes are still serving take outs and grocery essentials.

This means the earlier photos from the lockdown in spring bear a significant difference to the way urban landscapes look now.

For example, there are a fair amount of labourers and cleaning staff going out and about their business as usual. Spaces look less derelict and more like Sundays before London got crowded millennium onwards.

In urban green spaces, people don’t consider being in fairly crowded conditions, a threat from covid anymore. Benches are open and cyclists have equal access to parks.

The level of interaction with larger crowds is a personal preference.

On a recent cycle with Simon around trendy Hackney Wick and guardian reader pretentious Hackney on Victoria Park, the crowds were heavily dense in many public play areas and entrances.

Away from the long queues outside to pick up coffees and take outs in places where some think it’s important to be at, our was certaintly picking a fish and chips from a good old reliable affordable local chippy just east of Victoria Park to the Wick.

No queues, no wait, no hassle. After a five minute walk, we were enjoying dinner on a bench in the park.

In my next blog I will write about meaningful ways to spend preparing for Christmas holidays and Christmas day itself.

Many get carried away with meaningless cultural traditions, missing the point. Culture can be as oppressive as American culture’s cultural non existence, when it adds no experiental reflection or mindful rest.

In a time of self reflection I couldn’t be luckier having met four days after landing back from a two month trip away early August 2019. And here we are still are today.

Back in the park, we sat watching the lowering sun introducing the mist, the temperature drop, the sensation of colours struggling to define themselves in this new reality.

I suppose this time, it is also the first time of the year’s season under covid for our urban neighbourhoods too. Well I say, we can only pay homage to this another new reality for the family albums to come.

Really, what’s there to complain about? And why not to?

Kat Smith and Paul Cairney This new blog helps make the insights within Evidence & Policy accessible to all. In this opening post, the current Editors reflect on what they feel are some of the key insights about the interplay between evidence and policy:

Welcome to the Evidence & Policy blog: Our reflections on the field

Everyone should read Nick’s beautifully empathetic, humility fuelled, comicly crafted answers, coming from a big pool of love for his fans.

I first encountered his music as a punk/gothy teen at the Rebound club in Athens and my mature years had me thinking he needs to grow up and out of the pool of self-absorbsion and then his son died, and that was the fundamental lifetime event that I perceive when he did. We so need loss of life to define our reality and reconnect us with life again.

My girlfriend, a woman I love through soaring heaven and table-flipping hell, refuses to read any of my writing because she always sees some hint of infidelity, resentment, or perhaps madness in it. How do I get her to understand that just because I might write a poem about some lusty girl I saw on the train I don’t actually want to sleep with another woman?

Tom Waits famously wrote “You are innocent when you dream”, yet dreams are not nearly as innocent as they seem. Neither are songs nor poetry. Songwriting and poetry are perilous callings, full of intrigue and infidelity. They are covert undertakings that creep around our deepest and most hazardous needs. They are not for the squeamish or the eager to please.

I believe you when you say you don’t want to sleep with the ‘lusty girl on the train’ – the problem is what you want to do is actually worse. You want to write a poem about her. To write a song or a poem about another human being can be one of the most intensely intimate acts a person can perform, it is an act of profound, unblinking contemplation, a near religious meditation on that moment of carnal recognition.

Listen to Patti Smith’s version of ‘Gloria’, where she has taken Van Morrison’s already wolfish classic and expanded it into a supercharged religious rumination on lust.

I look out the window

Humpin’ on the parking meter

Leanin’ on the parking meter

Patti Smith’s ‘Gloria’ is not concerned so much with the actual sexual encounter, but rather with the brutal carnality and religious ecstasy of language itself. It is one of the most demented displays of predatory sexual desire ever recorded. Yet, it is beyond sex. It is even beyond worship. It is poetry. The “sweet young thing” that is “humpin’ on the parking meter” is your “lusty girl on a train”.

My song ‘Deanna’ was seen as a particularly brutal act of betrayal, and thirty years on I still haven’t been fully forgiven. I console myself with the thought that I was unflinching in my duties as a songwriter and in doing so wrote a song that brought joy to the lives of many, even though it broke a heart (or two) in the process.

From one wordsmith to another, and from someone who has spent a considerable amount of a long and contentious career in the songwriter’s doghouse, that’s the name of the game, Circium. Harsh as it is, we spend our lives walking on the hearts and messy eggshells we have smashed in order to make the omelet that feeds the multitudes.

I can perfectly understand why you want your girlfriend to read your stuff, as we poets and songwriters often have little else to offer than our words, and of course our perverse little truths. However, your poems are intimations of an eroticized and imaginative adventure of which your partner is excluded. It’s little wonder she might be reluctant to get involved.

Having said that, over time I have discovered great poetic and personal value in writing about the familiar, that which is in front of you, that which you see every day, that which sleeps beside you, for often that quotidian presence is the most extraordinarily complex and dangerous thing of all. It holds a looking glass up to beautiful and terrible truths that live inside us. As we look into our lover’s eyes and see our reflected selves, our courage as writers is tested and enlarged.

The girl on the train will always be there, forever travelling through that imaginative space, but maybe the challenge for you as a poet lies within the intricate wonder of the one who sits before you. She is, after all, your mirror.

Here’s to another festival in the heart of Canary Wharf to brighten up our beautiful crisp winter nights.

Camera ready we walked around in semi freezing drizzle checking out the 20 something light installations.

Hope you enjoy them as much as we did.

Just visited the Oregon Historical Society, where the disappointment turned into contempt and anger.

A state with around 200 years of history.

The first thing that I noticed is how everything was presented as a story of ‘doing’ instead of a series of histories emerging in equal importance on the narrative of what is new America.

The natives, the African Americans, the Asians presented as sharing the same space in an assumptive scenario that puts them in the otherness of America’s existence.

No narrative of their histories, just the acknowledgment they exist.

The pioneers who made this land in the forefront. The dislocations of indigenous people to securitize vast areas of land. The securitization agenda in its earliest form.

Securitise from what? This word serves the interests of those who are pursuing the agenda without equitable considerations for those marginalized in the process.

A history of half-hearted stories, incomplete narratives, equalization said but not existing in any form or story in real life.

The marketization of ideas, becoming ideas in themselves and accepted as currency fueling development, without any fundamental structure for emerging cooperation.

Forcibly changing a world that doesn’t want to change and presenting it as de facto.

I can dig a thousand words to describe the disappointment in American history. Mostly, because whoever took the lead in making this the common reality, had not thought through all they lost in the process of focusing on the small detail of the multiplicity the size of land has offered them.

Agrarian change for who, and to feed who?

The land of the amble, producing less for less.

The establishment of fake stories as a level of understanding of what might have been better imaginable.

I’m one to preach loudly and stand for what I believe.

I’m the one that I will point to injustice.

I am the one that tonight also feel bad for pointing the finger at someone who I have contrary views to while they put themselves in the public eye to defend those views even though they are ‘out there’.

I don’t like confrontation but learning to present what I believe in more confidently.

Yet that’s only possible when the other party stretches out so they can hear clearer.

Because without that, nothing would ever be possible.

The post is devoted to my day today at the School of Oriental and African Studies, yet it is written with an individual in mind, unrelated to my day at the university, yet being a member of the uni.

They surprised me beyond all expectations.

We are aware London is the haven for money laundering and a gateway to tax free heavens, but is it becoming more like Dubai than we are aware of?

I walked out at 6am to unchain my bike to find a maclaren left on the curve of my street.

I live in a nice part of the east end near the wharf non excluding drug dealing and rowdiness vibes depending the time and night of the week.

Last night, there was a party of very affluent Chinese kids on one end of the street, and a joint smoking around the cars dub party at the other.

Seeing the Maclaren in the morning came as no surprise, either of the groups can afford to scrape enough to hire or buy one.

Yes alone the car was impounded, just as I returned at 9.30am, slowly gathering a small crowd of early risers and security guards.

The parking attendant was as surprised. In his whole career, he’d never seen anything like it.

That brought me to an article I had read about Dubai’s airport doubling up as a super expensive car cemetery. Hundreds of cars left in a rush, for one way flights out of the country, often for very dodgy reasons.

My question in all of this is simple. Why dodgy men have a thing about super expensive and fast cars, beyond the bling factor.

Is there a club of angry men that buys and dumps super expensive cars, like a society, encouraging others to do so? And if so, how do I shut this thing down?

I’m conscious that they are a bad example, for both groups that were partying last night on my road. 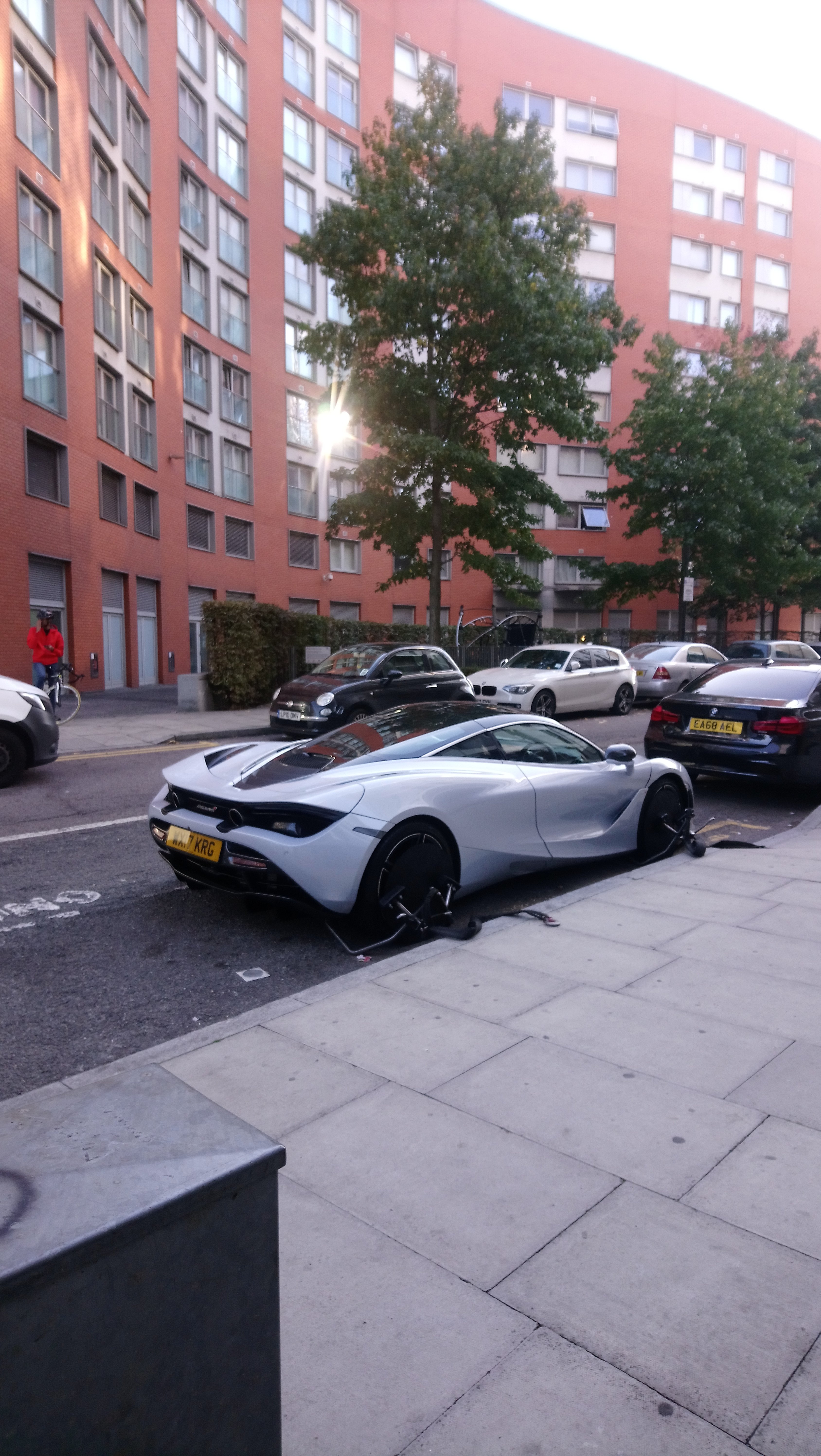